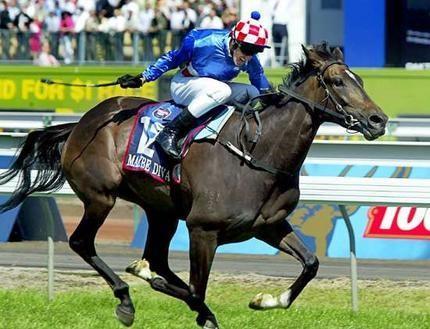 One of the important feature race lead ups occurs on Saturday with the running of the Makybe Diva Stakes. Obviously named after the great mare, Makybe Diva, the race is a Gr 1 Weight for Age contest over 1600m for a total prize of $750,000. First run in 1948, the race was originally called the Craiglee Stakes named after the home of Chief Steward Wilfred Johnston. It was a Mile and a Quarter or 2000m event from 1948 until 1964 and has been run at a ‘mile’ or 1600m ever since. It was elevated to Group 1 status in 2012.

As with most Group 1 races, the Makybe Diva has a tremendous honour roll littered with stars of the Australian Turf. The great Comic Court won the 2nd running of the event followed by Chiquita in 1950/1951. Later in the 50’s, International Star Sailor’s Guide won 2 years running. The 1960’s had many great winners; Lord (1961), Aquanita (1962), Havelock (1963), Light Fingers (1965), Tobin Bronze (1966) and Rain Lover (1969). Both Light Fingers and Tobin Bronze went on to win the Melbourne Cup in the same year as the Craiglee / (Makybe Diva). An amazing run of great winners occurred from 1975-1982, in order the winners were; Tontonan, How Now, Ming Dynasty, Family of Man, Dulcify, Big Print, Sovereign Red and Rose of Kingston. Other class winners of the race include; Zabeel, Mannerism, Mahogany, Jeune, Northerly, Weekend Hustler, Dissident and my favourite Fawkner. Many great horses have come through winning the Craiglee/Makybe Diva on route to winning either the; Cox Plate, Caulfield Cup or Melbourne Cup. This year’s winner is probably destined for further big wins during the Spring.

*Ironically, Makybe Diva NEVER ran in the Craiglee and only ever won once at 1600m, her maiden win at Wangaratta. Seems strange that the ONLY 3 time Melbourne Cup Winner has a race named after her at 1600m…

The story of Makybe Diva is a story well told with many twists and turns. She was born overseas and failed to reach her reserve at a foal sale. Bought to Australia by Tuna Fishing Millionaire, Tony Santic, she was named her after five of his employees – Maureen, Kylie, Belinda, Diane, and Vanessa – by taking the first two letters from each of their names. She would go on to win 3 Melbourne Cups and earn over $14.5 Million in prize money….but there is more to the Makybe Diva story.

Makybe Diva was originally trained by David Hall and had her first race as a late 3 year old in a Maiden at Benalla. 2 weeks later she won her Maiden at Wangaratta. Within 3 months she had won the Werribee Cup and the Queen Elizabeth Stakes.

When she returned in the Autumn, Makybe Diva went winless in 2 starts. She then started her path to the Melbourne Cup of 2003 in a lowly 1400m race at Caulfield finishing 4th. She had 3 more runs before the Cup and ran 4th in each one. Her lead up to the Cup was a 4th in the Caulfield Cup which enhanced her chances in the big 2 mile race. With a light weight of 51kgs, she was sent out an $8 second favourite and won easily by 1 ½ lengths. Returning in the Autumn she raced without winning until she claimed the Sydney Cup over 3200m. Trainer David Hall then left for Hong Kong and she was transferred to Lee Freedman.

She again started 4 times before the Melbourne Cup and again went winless. She did however, run 2nd in the Caulfield Cup to show she was right on target but this time she was asked to carry 55.5kgs. Cup Day 2004 was wet and the Diva was opposed to the great Irish Stayer ‘Vinnie Roe’, who was very comfortable in the wet but burdened by a huge impost of 58.5kgs. In a slogging finish, the 2 great horses singled out before the Diva won by a length. She returned in the Autumn and showed great form winning the Australian Cup and BMW.

After her great form it was decided to take Makybe Diva to Japan where she would run in the Tenno Sho, a high class 3200m event worth $3 Million. In both the lead up run and the Tenno Sho she wasn’t comfortable on the firm going and finished midfield. Many thought the great mare’s better days were behind her and that Santic would retire her…but he had other thoughts.

Resuming in the Memsie as a 7 year old, Makybe Diva did something she’d never done before…she won 1st up and at 1400m. Her form that Spring was the best of her career and she certainly went out with a bang. After her Memsie win she ran 2nd in the Feehan then won both the Turnbull and the Cox Plate. At 7 she had gone from a wonderful stayer to a Champion Middle Distance WFA horse…she would head to the historic 3rd Melbourne Cup in outstanding form but this time she was carrying 58kgs which would be a weight carrying record for a mare. History tells us she completed the fairytale with ease and in the immortal words of race caller Greg Miles ‘a Champion becomes a Legend’….Santic retired the great mare immediately as the highest prize money winner in Australia ever and the winner of 10 different ‘Champion’ Awards.

Makybe went to Galileo in her first season at stud and produced a colt who was called Rockstardom. Sold for $1.5 Million he won 2 races from 12 starts. She later produced a Filly by Fusaichi Pegasus (sold for $1.2 Million) and Colts by Encosta De Lago, Lonhro and High Chapparal…only the Lonhro colt would win a race.

Watch this great tribute to the mare