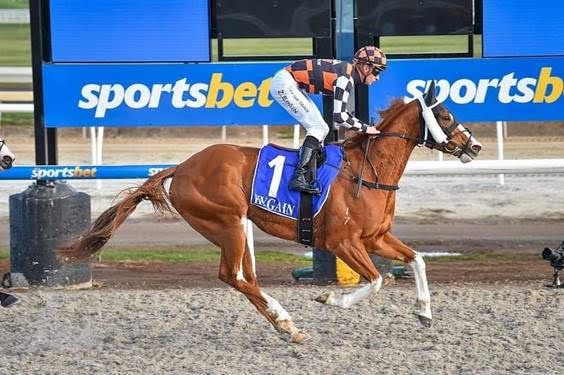 What a great win by Apache Star today at Ballarat. Carrying the hefty impost of 64kgs, Apache jumped ok but Zac elected to sit him back in 4th position. The gelding didn’t seem to appreciate the kick back on the Ballarat surface so Zac then elected to sit him out 3 wide until the turn. Seemingly Apache still wasn’t travelling but once he was taken out wide he gathered good momentum and powered home down the outside for an easy 1.75L win. Zac Spain was full of praise with the gelding’s effort not only carrying the 64kgs but also the determination he showed in the straight.
Depending on how he pulls up Apache may head to the 50k Synthetic Series in august.
Apache has found a new lease on life since coming back to Victoria winning twice and placing in 6 starts. He has shown at times to be a little tricky and over doing it but when settled and on his game, he is a hard horse to beat.
A 67.5k Magic Millions purchase in Adelaide , Apache takes his record to 17 starts for 4 wins 1 x 2nd & 2 x 3rds and earnings over 81k.
Congratulations to all owners in Apache and thanks to Stokes Racing once again.