Off the Bit Vol 24…Colic 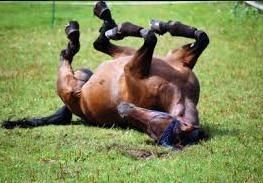 Colic: the most common equine killer…not a great opening statement but sadly Colic accounts for most equine deaths, far more than any diseases or training/racing or eventing accidents. From time to time, we read in the press or hear through other media outlets of the death of a famous racehorse because of colic. But what is colic?

Colic is simply “pain in the abdomen” or “pain in the belly.” There are many causes for such pain, ranging from the mild and inconsequential to the life-threatening or fatal. One of the problems with equine colic is that it can be very difficult in the early stages to distinguish the mild from the potentially fatal. This is why all cases of abdominal pain should be taken seriously right from the onset.

The signs of colic in horses range from almost unnoticeable in mild cases to extremely violent in severe cases. The following list includes the most common signs:

What to do if Colic is suspected:

The severity of the case will dictate what trainers do when they find a horse showing signs of colic. If it is behaving violently they will call the veterinarian immediately. Violent behaviour usually equates with great pain which usually equates with a serious case of colic. Time is of the essence here. Not all horses show the same severity of signs with the same type of colic, though, and some horses may become quite violent with a relatively “mild” case. If the signs of pain are less extreme, it can take a few minutes to observe the horse’s appearance and behaviour before calling the veterinarian.

The horse has a large GIT and this can make the site of a Colic Attack quite difficult to find. The Diagram shows the size of the Horses GIT and the complexity of Abdominal area

Impaction Colic: this occurs when there is a large mass of food stuck usually in the large intestine. It is often fixed with immediate treatment and the best thing you can see at this stage is your horse having a ‘poo’.

Gas Colic: sometimes gas builds up in the intestine, most commonly in the large intestine and/or caecum. The gas stretches the intestine, causing pain. Gas colics usually resolve fairly easily with appropriate treatment.

Spasmodic Colic: some cases of colic are due to increased intestinal contractions, the abnormal spasms cause the intestines to contract painfully. These cases usually respond fairly well.

Displacement/Twisted Gut: this is by far the most serious colic which will result in death unless surgery is performed quickly. In a “displacement”, a portion of the intestine has moved to an abnormal position in the abdomen. Except in rare cases, these types of colic cause a total blockage of the intestine and require immediate surgery if the horse is to survive. In the early stages of a displacement/torsion colic, the signs may be similar to those of a horse with one of the more benign causes of colic. That is why it is important to take all cases of colic seriously, and to seek veterinary advice at an early stage.

Thankfully trainers and agistment providers are very aware of the signs of colic and usually act very quickly in diagnosing and dealing with an issue.