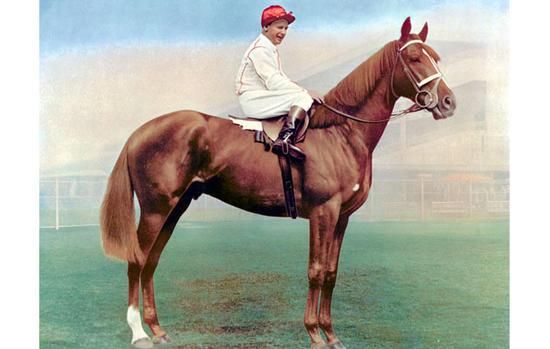 Off the Bit Vol 26…Champions ‘Ajax’

It’s probably unfortunate that the great race horse AJAX is best remembered for getting beaten rather than his amazing record that ranks him as a great of Australian Racing. The facts are AJAX holds the dubious honour of being the shortest priced loser ever on Australian Race Tracks. This defeat happened in the 1939 Rawson Stakes when AJAX was inexplicably beaten by Spear Chief. The real surprise is this defeat had followed 18 consecutive wins and AJAX was regarded as unbeatable.

AJAX was foaled in 1934, being by wonderful Sire HEROIC from the imported Mare MEDMENHAM. He was her 3rd foal and followed the talented filly Hesione who won the Gimcrack, Maribyrnong Plate and Ascot Vale Stakes at 2. Ajax was trained by Frank Musgrave and principally ridden by Harold Badger. Together, Badger and Ajax would appear in 37 of his 46 starts for 30 wins, 5-2nds and 2-3rds. Ajax won from 1000m to 2400m and broke the Australian 1600m record.

Ajax won his first 2 starts before being unplaced for the only time in his career in the VRC Sires Produce Stakes. He ran 2nd in the Ascot Vale before returning to New South Wales where he won both the AJC Sires Produce and Champagne Stakes.

Ajax returned at 3 and won his first 2 starts including the Rosehill Guineas. He then finished 2nd in the AJC Derby conceding the winner 12kgs. Back to Melbourne he won the Caulfield Guineas before being beaten a head by Hua in the VRC Derby. Ajax then rounded out his 3yo season with 6 consecutive wins including; Linlithgow, Futurity, Newmarket and All Aged Stakes…what a horse!

Ajax’s 6 consecutive 3yo wins were followed by 12 more in his 4yo season. The super star of Oz Racing went from Nov 4 1937 to Mar 11 1939 without losing. Included in his perfect dozen at 4 were the now Gr1 races; Underwood, Makybe Diva, Caulfield Stakes, Cox Plate, MacKinnon, Linlithgow and Futurity. The last of the 18 straight was the VRC Lloyd Stakes in which he started 16 to 1 on, meaning if you put $16 on him you would get $17 back…understandably, in a field of just 3 he would be at the prohibitive odds of 40 to 1 on next up in the Rawson Stakes. History shows he was beaten and is best remembered for this defeat…2 weeks later he won the All Aged then one other event to finish a 4 year old season of 15 starts for 14 wins and 1 loss.

Ajax won his first 2 starts at 5 winning the Underwood and Memsie again. Had he have won the 1939 Rawson Stakes he would have won 23 in a row…a record which would have stood for over 70 years until a little neddy called Black Caviar won 25 in a row. In the Autumn he was beaten into 3rd in the St George before winning the Futurity for the 3rd time and then the King’s Plate. Another rare defeat occurred in the Lloyd Stakes before a 3rd win in the All Aged and another win to end his 5yo season.

Surprisingly, Ajax raced on at 6 years…that’s what Stallions did in those days. He won the Memsie, Melbourne and Underwood all for the 3rd time. He then got rolled in the Cox Plate and Caulfield Stakes, running 2nd in both.

Ajax retired to stud in 1941 and would Sire 9 Stakes Winners before being sold at 14yo to America to a group including Bing Crosby. He Sired Gr 1 winners Achilles and Magnificent and was the Broodmare Sire of 4 other Gr 1 Winners including Golden Slipper Winners Magic Night and Birthday Card.

His Stud Record in USA was less than impressive although he did get a few good winners.

He was inducted into the Australian Hall Of Fame in 2004.

Here is some rare footage of the Super Star…