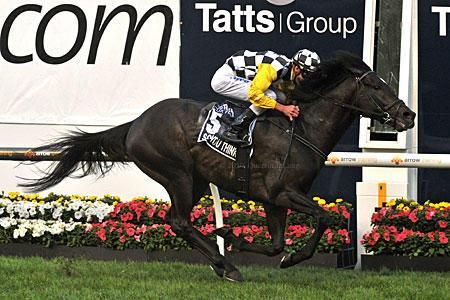 The major Moonee Valley lead up for the Cox Plate is Saturday’s Dato’ Tan Chin Nam Stakes named after Malaysian Entrepreneur Dato’ Tan Chin Nam. Dato’ is one of Malaysia’s wealthiest men responsible for the Shangri La Hotels and various shopping centres and malls. In Australia, he is known as one of the most successful race horse owners of all time having won the Melbourne Cup 4 Times. Dato’ teamed up with Bart Cummings in the early 1970’s and one of the first horses he raced here was dual Melbourne Cup Winner Think Big who saluted in 1974-75. The combination of Bart and Dato’ became a force and his Black and White Checks with Yellow Sleeves became synonymous in winning most of Australia’s Great Races. Dato’ realised ever owners dream in owning a Champion not once but twice. Firstly, Saintly, the ‘Horse from Heaven’ who won a Cox Plate and Melbourne Cup came along followed by International Superstar So You Think who won 10 Gr 1 Races including 2 Cox Plates and various big races in Europe including the Eclipse Stakes and Irish Champion Stakes.

Since 1975 only Fiorente in 2013 has won the Dato’/Feehan and gone on to win the Melbourne Cup. In that same period, 8 horses have completed the Dato’/Cox Plate Double and what a great band of horses they are; Strawberry Road, Rubiton, Our Poetic Prince, Better Loosen Up, Sunline, Northerly, El Segundo and Fields Of Omagh. 3 of these stars won Gr 1 International Races which elevates the worth of the Dato’ to a lofty level. Here’s a more detailed look at a few of these stars.

It will be interesting to see how this year’s winner fares going forward to the Cox Plate held 6 weeks later.