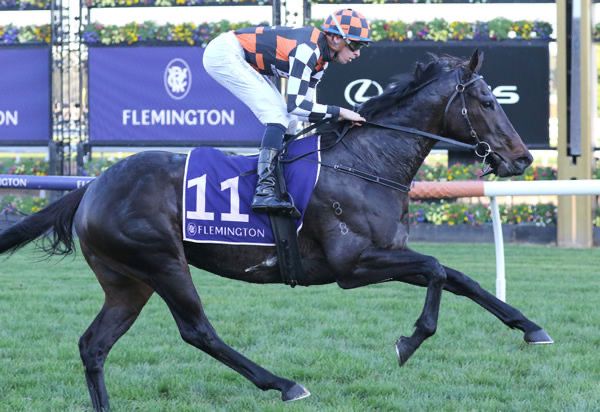 WOW what a win by Texas Tea at Flemington over 2000m last Saturday.

The recently purchased New Zealand 3yo gelding put it all together with a devastating win by 2.8L eased down by Mickey Dee towards the line. Jumping well Texas Tea settled in 5th on the rails and unlike his South Australian Derby run he didn’t fight throughout the run, settling well. When Dee presented him on straightening the gelding unleashed a devastating turn of foot careering away and putting the race beyond doubt at the 300m mark.The gelding hasn’t been an easy horse for Ciaron and Dave and a lot of behind the scenes work has been done with him. Jumps jockey Willy Mc Carthy has been instrumental in teaching him to settle in his work and even up until recently he has been aided by a lead pony for trackwork. Testament to the ability of his trainers they have continually tinkered with the horses gear and his work even schooling him over jumps. Dave was full of praise for the 3yo saying he will only improve as he learns more.

Texas Tea is a scopey gelding very typical of a real New Zealand staying type. He will head towards the Mahogany Series Final over 2500m at Flemington in two weeks.Texas Tea is a son of Gr1 Australian Derby winner Puccini out of a 1/2 sister to Gr1 New Zealand Oaks winner Midnight Oil and was sourced in New Zealand by respected agent Phil Cataldo. He is also the first New Zealand tried horse purchase for Bennett Racing.Congratulations to all owners who had the faith to buy into the gelding. He looks a really promising stayer of the future!