ANOTHER METRO WIN FOR DEFIANT DIVA 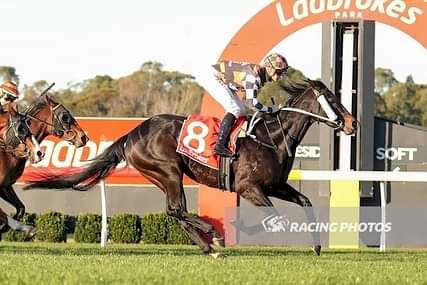 What a good mare Defiant Diva is bringing up her 4th win today at
Sandown. Four you say! well the back story is she was beaten into 2nd
place on debut. But the winner of that race was subsequently
disqualified and well over 12 months on Defiant Diva’s owners received
the extra win and the prizemoney. So in fact Defiant Diva won two
maidens as she won up on the Gold Coast two starts later.

Back to todays effort at Sandown. The mare jumped well and was placed in
the 3 wide lane by Ethan Brown. Racing comfortably in that position
Ethan had the mare in a good rhythm and in space. On the turn she
travelled up nicely under a hold and when Ethan let her down she bolted
away to win easily.

Originally aimed at some Blacktype races in Adelaide this preparation,
a  lot of things haven’t gone to plan this preparation with Defiant Diva
as she had hoof issues early on when she arrived for pre training. Her
first up run was ok but on a heavy track she floundered a bit. But she
presented in great order today and aided by a great ride she win with
ease. Just the tonic for her injured co trainer Troy Corstens.

Well done to all owners and thankyou to the all Malua Team and Geelong
where she is based,  the mare looks capable of winning a nice Saturday race.