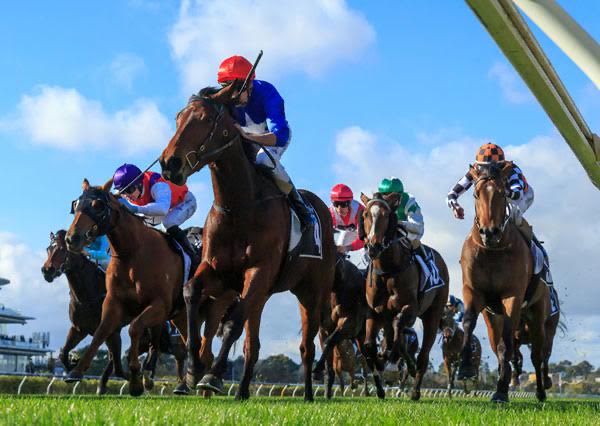 Outstanding efforts by Bennett Racing 2yo’s Magnaspin and Zou Sensation highlighted Flemington Winter Finals Day.
Magnaspin (above) became Bennett Racing’s 6th Blacktype performer with a terrific effort for 3rd in the Listed Taj Rossi Series Final 1600m. This is a race that highlights horses for the future and Goldifox had run 3rd in a few seasons ago. On Saturday Magnaspin stood up gave his owners promise for the future for sure.
Jumping well, Magnaspin was set alight early by Blaike McDougall in what’s was some very solid sectionals for 2yo’s. With natural leader Zoe’s Promise sitting up outside him, Magnaspin proceeded to set a good pace well into the straight before that earlier toll told and he weakened slightly to the post to be beaten only 1.2L.
Luck hasn’t always gone the colt’s ways and he is still a maiden after 4 starts but Magnaspin is twice 2nd placed at Flemington and now a Listed placegetter. In some ways it’s quite remarkable that he has even raced at this stage as he was a slightly backward gangly yearling. A very well related Magnus colt, Magnaspin was a 60k purchase from the Maluka Draft at Melbourne Premier. From day one he has proven to be a bombproof type of colt always stepping up to the plate and trying his best. The colt will probably go for a break after such a great first prep and perhaps eye off some spring targets.
Winning on debut at Murray Bridge, Zou Sensation lined up in the Next Gen Sprinters Final 1200m for 2yo’s down the straight earlier in the day. A big raw colt with a terrific stride Zou Sensation drew well but cost himself when the barriers opened, leaping into the air and losing a len. Zac Spain didn’t panic and moved the colt up behind the leaders where he travelled for the remainder. The colt got a little of the wanders but started to push through at the 200m mark and was very good and strong on the line for 3rd beaten under a length.
Zou Sensation is a real natural running colt who will only get better with time and once he learns to control his big stride. The colt was a 150k Magic Millions purchase from Widden.
The normally very consistent and talented Blazerro rounded out the day with slightly plain effort in the Silver Bowl Series Final over 1600m. The gelding has had a wonderfully consistent prep this time in although not winning. This time he was found flat footed when the others sprinted. It must be remembered that he has carried some huge weights this prep and usually on very wet ground so perhaps this finally took its toll.
Phil Stokes has sent the gelding to the paddock for a well earned rest.
In all it was a great days racing with quite a few owners braving the cold and their horses showing plenty of promise for the future.