DOMINATE WIN TO MAID OF IRON 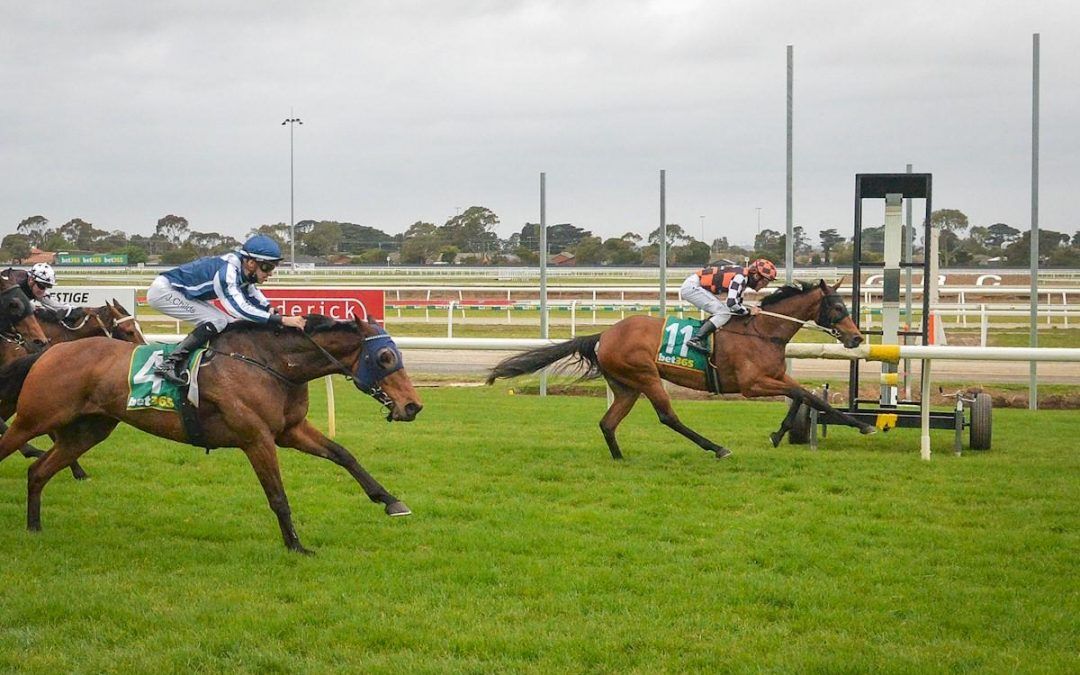 A dominate win by 4yo Dundeel mare Maid Of Iron at Geelong yesterday reignited the promise this beautiful mare has always shown. She had been okay first up after a wide trip over 1300m but Damian Oliver, who stuck firm to ride the mare, suggested that stretching her out to 1700m for the first time would be something he was confident she would appreciate. And appreciate it she did relishing the jump from 1300m to 1700m. Settling closer than normal she travelled well and was poised coming to the turn. Damian took the chance, darted to the inside on straightening and in doing so gave Maid Of Iron the confidence to record her 2nd win in 6 starts. The turn of foot she showed yesterday was reminiscent of her debut win at the same track.  It was also the 2nd win on a Bennett Racing horse by champion jockey Damian Oliver. Oliver also thought that although she may look for more ground later on, at this stage he would keep her around the same distance for now.
It was fantastic to see her stride out so well throughout the race and show determination to the line.

A brilliant debut winner at Geelong last December, the then 3yo filly was put away with aspirations towards a SA Oaks campaign. Resuming mid March with a nice 4th at Sandown followed by a 3rd also at Sandown, Maid Of Iron then ran 4.25L behind future Gr1 South Australian Oaks winner Media Award at Geelong.

The filly had shown a tendency to lay in but with no physical reason so she was sent off to CRC Equine after a spell. We have invested a lot of confidence in the work that is done at CRC Equine feeling that correct education and teaching young horses to use themselves correctly can be nothing but beneficial.

At CRC Equine Francesca and her daughter Courtney worked on the now mare teaching her to work on straight lines and to use herself correctly. Francesca felt she was a mare with enormous power but had no idea how to use it and was sure she frightened to as well.

Being a well bred daughter of Champion sire Dundeel from a stakes performed Encosta De Lago mare, Maid Of Iron is a stunning type and was always a head turner but did have a mind of her own.

The future now looks bright again for this 87.5k Magic Millions purchase and she may very well deliver now the promise she has always shown.

Congratulations to all owners and thankyou to Team Corstens delivering yet another winner.