OUR TONINICCONI BRAVE ON DEBUT 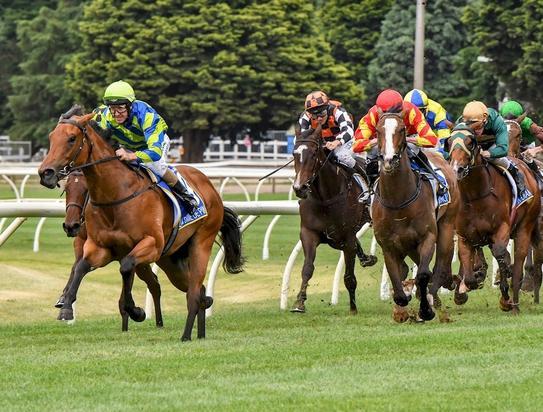 What a performance by our girl, OUR TONINICCONI in the Magic Millions Clockwise Classic run at Ballarat last Saturday. After days of anticipation on whether she’d actually make the field, Our Toninicconi took her place in the field of 11 in the only Clockwise race run in Victoria. This race is a major lead up to the $2 Million 2yo Magic Millions Race run on the Gold Coast in January. With Prize Money of $200,000, this race is the richest 2yo race run in Victoria this season so far. Our Toninicconi was purchased out of the Adelaide Magic Million Yearling Sale back in March. Tony McEvoy was very keen on the filly, as was Bennett Racing’s Bloodstock Advisor, Phil Wells. She was eventually knocked down to Tony for $100,000 and Tony offered her to Nathan to Syndicate for Bennett Racing. Tony and Nathan identified the Ballarat Race as a goal for the Filly and she was put on the path towards the race. Incredibly, 8 months later she was in the field and one of the favoured runners. This was a fantastic achievement by the McEvoy team and confidence was high after a sizzling trial at Ballarat 2 weeks prior. Tony made no bones about the fact he liked the filly and was thrilled with how she had handled everything thrown at her. Her physique and temperament seemed to be matched by good ability. Installed as favourite for the race and widely tipped in the media, the last chapter in this story was the race itself and hopefully a happy ending.

The Race: An hour before the race, the heavens opened and the track went from a Good 3 to Soft 7 and the nature of the race changed. None of these babies had seen a wet track before. Our Toninicconi jumped cleanly but copped a squeeze from her stablemate which cost her a more forward spot. Hugging the rails it became evident that our girl was struggling in the going before the turn. On straightening she was bogged down in 8th position and dropping out. Despite slipping and sliding and never using her sweet action to advantage, Our Toninicconi dug deep and courageously pushed through. She had to change course at the 100m mark but still forced her way into 3rd place, an amazing effort considering her difficulty with the track.