SO CLOSE FOR SIBAAQ ON AUSTRALIAN DEBUT 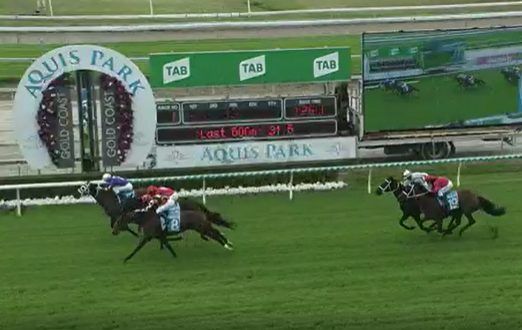 What a terrific effort by Sibaaq on his Australian debut at the Gold Coast on Saturday. The gelding had not raced since the 24th September 2021, then travelling to Australia and also spending long periods in quarantine.
Sibaaq had been very good in his trials here for Annabel Neasham and his debut had been pushed back by wide barriers and wet tracks.
Annabel felt that although Saturdays track at the Gold Coast was going to be effected the gelding needed to start off his campaign and after inspecting the track Thursday decided that he would take his place in the field.
Installed a short price fav Sibaaq jockey James McDonald had not a lot of choice but to balance up the gelding from the wide barrier and settling him wide on the shifty wet track.

To his credit Sibaaq kept coming but was beaten on line the line by a race fit horse who come in underneath him to win.
Both James and Annabel were full of praise for his effort saying he will be benefit greatly from the run.

Annabel will try and dodge wet tracks with him for his next run.
Selected from last years Tattersalls Horses In Training Sale and imported out  to Australia shortly after,  the horse looks a really exciting prospect for Bennett Racing and his owners.